The 22 Fillmore serves 18,000 daily riders, but it currently travels at less than 4 miles per hour on parts of 16th Street.

To address the transportation needs of current and future residents, workers and visitors to 16th Street, community-informed improvements are being implemented on 16th Street from Church to 3rd streets that will include transit-only lanes, transit bulbs, new traffic and pedestrian signals, as well as new streetscape amenities.

The 16th Street Improvement Project aims to improve transit reliability and travel time by nearly 25%, while addressing safety and accessibility. This project is part of Muni Forward, an ongoing initiative to create a safe, reliable and comfortable experience on and off transit.

Outreach began in 2014 initially to get feedback on transit service of the 22 Fillmore and later including a larger project scope that would become the 16th Street Improvement Project.

The community was engaged through community meetings, mailers to residents and business owners along the corridor, ads in local newspapers, blog posts, bus shelter posters, and targeted emails to stakeholders.

Spring 2015, Outreach increased to include project scope of the 16th Street Improvement Project

Feedback from the community meetings, stakeholder meetings, and surveys helped shape the project proposal in several ways. The original plan called for additional stops to be removed and included an option for tow-away lanes to create transit-only lanes in both directions. But after considering and incorporating the community’s feedback, the final project proposal updated the stop spacing proposal, preserved more parking, and changed the transit-only lane to only westbound between Church and Bryant streets on 16th Street.

To provide zero-emission transit service into Mission Bay, the project includes extending the overhead contact system (OCS) that powers trolley buses on 16th Street from Kansas Street to Third Street. This will allow the 22 Fillmore to be extended into Mission Bay. Additionally, new bike lanes have been added to 17th Street to create a continuous route from Mission Bay to the Mission Neighborhood.

Along with the important improvements to 16th Street, the eastern end of the 22 Fillmore route will shift to serve the growth in jobs, housing and hospitals in Mission Bay. A replacement route, 55 Dogpatch, was created through a community process that will ensure service is maintained to Potrero Hill and the Dogpatch areas once the 22 Fillmore shifts to Mission Bay and 3rd Street.

The project will be delivered in two phased segments, with two separate construction contracts. Construction of Phase 1 from Potrero Avenue to 3rd Street was completed in the summer of 2020. Phase 2 is from Church Street to Potrero Avenue and is planned to start construction in early 2022.

Phase 1 construction on 16th Street from Potrero Avenue to 3rd Street was completed in summer 2020.

Phase 2 construction will be implemented along 16th Street between Church Street and Potrero Avenue. Construction is scheduled to begin early 2022.

As part of the Transportation Effectiveness Program (TEP), now called Muni Forward, the "22 Fillmore Transit Priority Project" (now called the "16th Street Improvement Project") is part of a larger network of proposed or planned improvements to the Muni system in order to improve reliability and speed, and increase overall system effectiveness. Muni Forward takes a system-wide approach in its assessment with an understanding that for transit to work well throughout the city, key heavy-use routes like the 22 Fillmore need to serve riders and the overall system more efficiently.

In an effort to reduce greenhouse gases and support improved transportation in the neighborhood, the SFMTA was granted $2.5 million to help fund construction of the 16th Street Improvement Project from the Affordable Housing and Sustainable Communities grant in partnership with BRIDGE Housing and Mission Housing Development Corporation that will help build over 150 affordable units at 1950 Mission Street. The Affordable Housing and Sustainable Communities grant funds land-use, housing, transportation, and land preservation projects to support infill and compact development that reduce greenhouse gas emissions.

On a city-owned property a half-block from the 16th Street BART station, two housing developers will build over 150 apartments that will be affordable to families earning between 45 percent and 60 percent of San Francisco’s median income. About a quarter of the building’s apartments will be earmarked for formerly homeless families, according to BRIDGE.

Dec
2
Public Hearing: Tree Removals along 16th Street Notice is hereby given that the SFMTA Hearing Section will hold a remote public hearing via...
May
7
Community Meeting, 16th Street Improvement Project Phase 2 Curious about what the City has planned for 16th Street between Church and Potrero in the Mission?...
Jan
19
Board of Directors meeting, January 19, 2016
END_OF_DOCUMENT_TOKEN_TO_BE_REPLACED 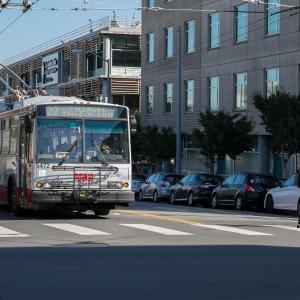