7th and 8th are one-way streets in the South of Market (SoMa) neighborhood running north (7th Street) and south (8th Street) as a couplet. As 7th and 8th provide access to freeway on- and off-ramps, and are part of the 19-Polk bus route, the streets’ existing design presents the potential for crashes between people walking, bicycling, taking transit and driving.

With bicycle facilities already located on Market, Howard, Folsom, Brannan, and Townsend Streets, 7th and 8th are important bicycle network links, connecting people on bike to the City’s south and east neighborhoods, which include destinations like the Caltrain station and Mission Bay.

In 2016, former Mayor Ed Lee issued an executive directive on bicycle and pedestrian safety on bicycle and pedestrian safety, explicitly calling for a focus on delivering near-term safety improvements on 7th and 8th streets. In 2019, Mayor London Breed further underscored the importance of building a connected network of protected bikeways to make streets safer through quick-build improvements on 7th Street.

This project’s main goal is to improve safety and comfort for all modes of transportation along these corridors. This project will implement targeted improvements to better facilitate the interactions of various modes and minimize the potential for conflicts.

The 7th Street and 8th Street Safety Project is in support of San Francisco’s Vision Zero commitment of eliminating all traffic deaths and serious injuries. 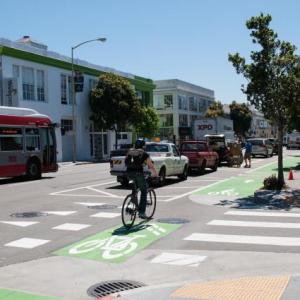