Cable cars were invented by Andrew Smith Hallidie here in San Francisco in 1873. Hallidie's cable car system was based on early mining conveyance systems and dominated the city’s transit scene for more than 30 years.  Hallidie's cable car system would survive the great San Francisco earthquake and fires of 1906, soldier on through two World Wars and outlast political attempts to remove the cars from city steets in the late 1940s and 1950s to become the worldwide symbol of San Francisco that it is today.

Birth of the Cable Car

Andrew Smith Hallidie tested the first cable car at 4 o'clock in the morning, August 2, 1873, on San Francisco's Clay Street. His idea for a steam engine-powered, cable driven rail system was conceived in 1869, after witnessing horses being whipped while they struggled on the wet cobblestones to pull a horsecar up Jackson Street.

Hallidie's father was an inventor who had a patent in Great Britain for "wire rope" cable. Hallidie immigrated to the U.S. in 1852 during the Gold Rush. He began using cable in a system he had developed to haul ore from mines and in building suspension bridges.

Hallidie entered into a partnership to form the Clay Street Hill Railroad, which began construction of a cable line on Clay Street in May of 1873. The contract to operate on city streets stated the line must be operational by August 1. It was launched on the August 2. Even though they were a day late the cable car trials received great approval. Clay Street Hill Railroad began public service on September 1, 1873. It was a tremendous success. 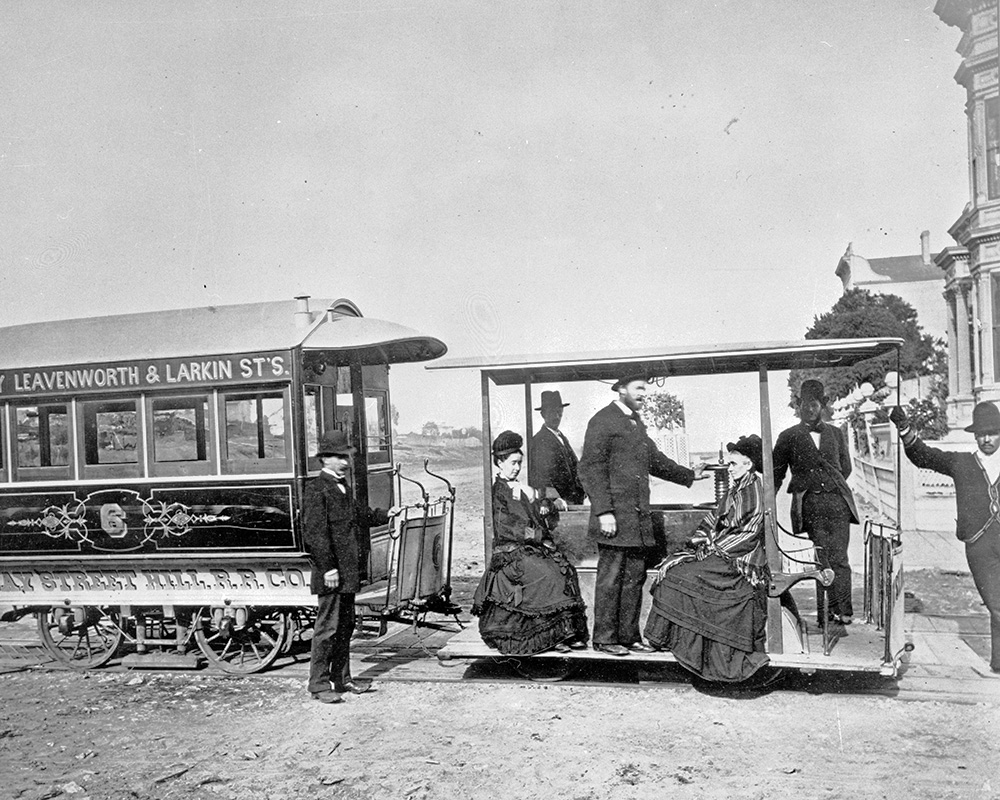 All totaled, San Francisco companies had laid down 53 miles of track stretching from the Ferry Building to the Presidio, to Golden Gate Park, to the Castro, and to the Mission.

April 18, 1906, the great San Francisco earthquake and the fires that raged out of control in its aftermath devastated the city.

By this time the electric streetcar, perfected in1888 by Frank Sprague, had become the vehicle of choice for city transit. It only required half the investment to build and maintain, could reach more areas and was quicker. The cable cars were still able to traverse the steep hills better, so some of the lines were rebuilt. However, as the streetcars improved, even those lines were in jeopardy. 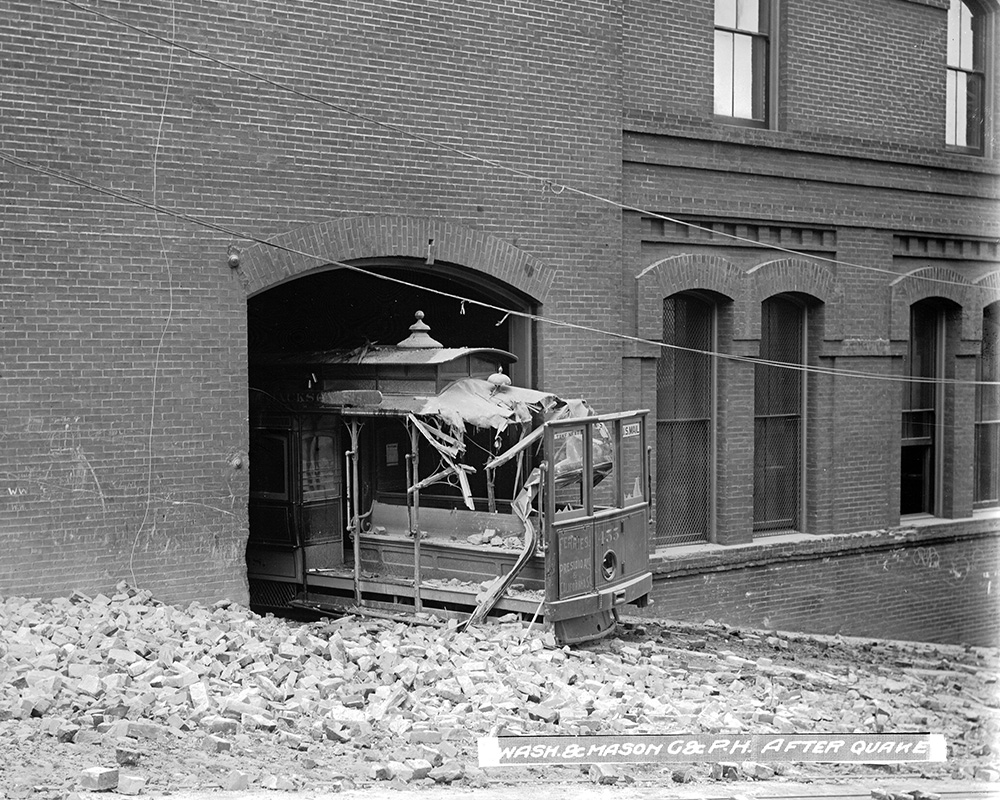 On the morning of April 18, 1906, Cable Car 155 was damaged by falling bricks and debris in the doorway of the cable car house on Washington Street just east of Mason Street. This building, known as the Washington Mason Cable Car House and Powerhouse, was rebuilt after the 1906 earthquake and is now a National Registered Landmark. Today, it is the site of the Cable Car Museum, and it still serves as the headquarters for cable car operations, including storing cable cars and powering cable machinery. Image U00776 from the SFMTA Photo Archive.

Save the Cable Cars

By 1947, the lower operational costs of buses prompted Mayor Roger Lapham to declare, "the city should get rid of all cable car lines as soon as possible."

In response, Friedel Klussmann founded the Citizens' Committee to Save the Cable Cars. The committee began a public campaign showing that the cable cars’ value to San Francisco was far greater than their operational cost. They succeeded in placing an amendment on the November ballot, Measure 10.

Newspapers picked up the story and public support grew quickly. Life magazine did a photo spread on gripmen. Celebrities rallied for the cable cars; business owners realized that tourists didn't come to San Francisco to ride the buses.

Measure 10 passed in a landslide victory and the city of San Francisco had rallied to save the Powell Street cable car system. 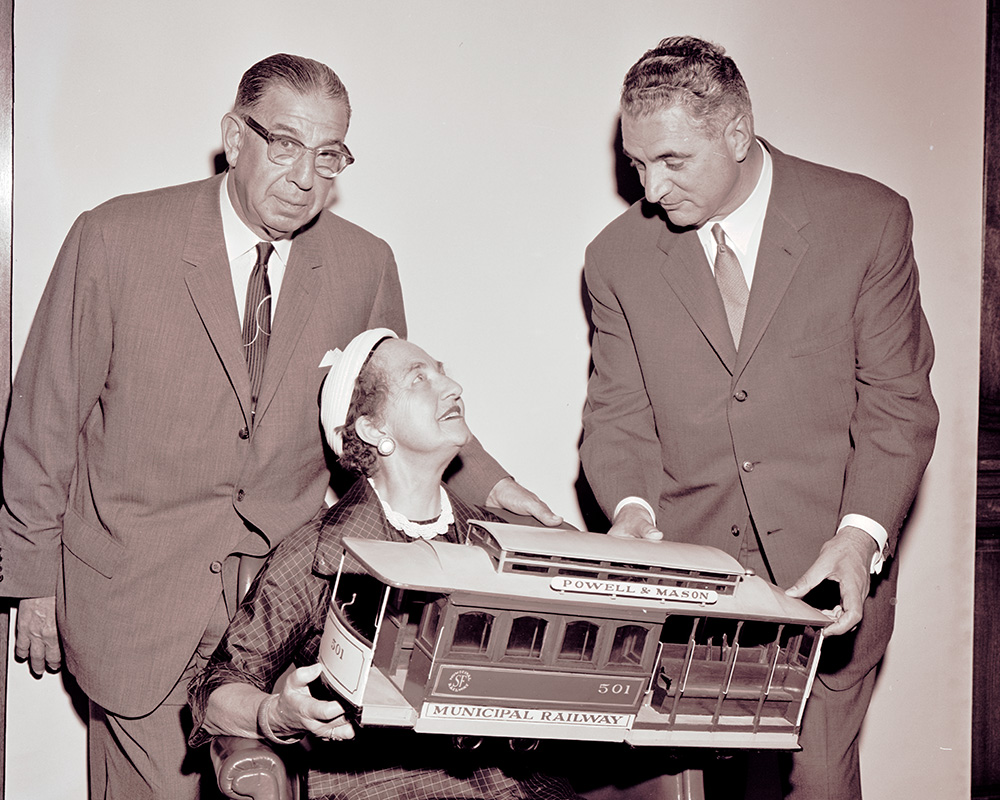 Friedel Klussman sits in the foreground holding a model of Cable Car 501 with Public Utilities Commissioner Greenberg on the left and Mayor Christopher on the right after the successful preservation of the cable car system. Image X7263 from the SFMTA Photo Archive.

Today, there are two types of cable cars in regular service. Though they differ in appearance, their operation is almost identical.

The California Street Cable Car Line uses twelve larger, maroon cable cars which have an open seating section at each end and a closed section in the middle. These cars can be operated from either end, and turn around by means of a simple switch at the end of the line. 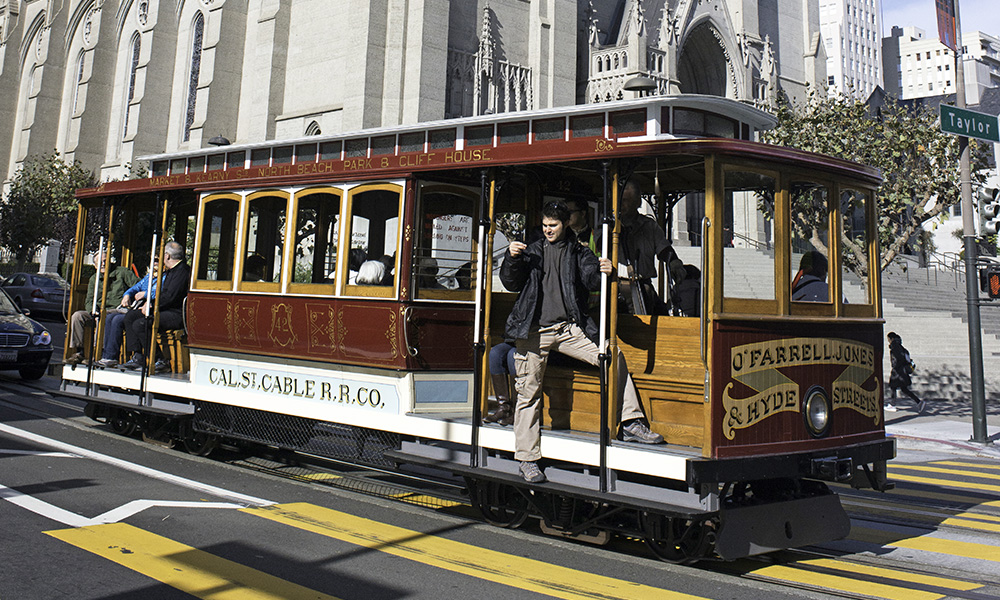 The two Powell Street lines (Powell-Hyde & Powell-Mason) use smaller cable cars, operable from only one end and thus require turntables to reverse direction at the ends of the line. There are 28 Powell cars kept on the roster at any given time. Several sport historic liveries recapturing the look of the cars at various points in the twelve-decade history of the service. 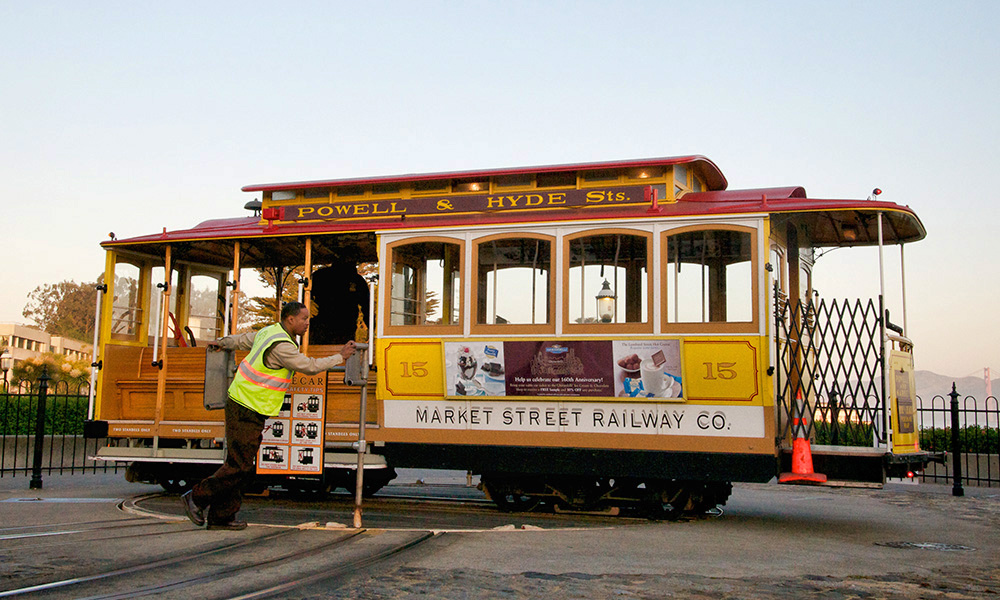 An example of a single-ended Powell cable car on the turntable at Hyde and Beach Streets in Aquatic Park. This cable car features a historic paint scheme, also known as "livery," from the era of the Market Street Railway Company of 1893 to 1902. Image 120507_067_Car25 from the SFMTA Photo Archive.

Additionally, there are unique cable cars from now-vanished lines which Market Street Railway and the Cable Car Museum are working to return to service in the future.