Construction from 14th to Octavia to start in July 2021

In spring 2021, San Francisco Public Works awarded Esquivel Grading & Paving, Inc., a contract to support the final construction phase of the Upper Market Safety Project, which has a total budget of $10 million. These changes include sidewalk widening and other accessibility upgrades (primarily where existing ‘painted safety zones’ have been in place since 2015), new traffic signals, transit boarding island enhancements, and streetscape amenities such as center median uplighting and decorative crosswalks. These investments reflect years of community input to address safety issues at Upper Market’s wide, multi-way intersections and support neighborhood identity and a vibrant commercial corridor.

City and private contractor crews will begin work on the first project phase, from 14th Street to Octavia Boulevard, in July 2021. Work will continue at the Guerrero/Laguna and Octavia Boulevard/Central Freeway intersections until late 2021 or early 2022. Work on the western half of the corridor (between 14th and Castro) will not start until early 2022, with most of the project expected to be finished by June 2022.

A summary map and more details about what to expect during construction are available.

Visit Public Works' website for the most up-to-date information during construction. 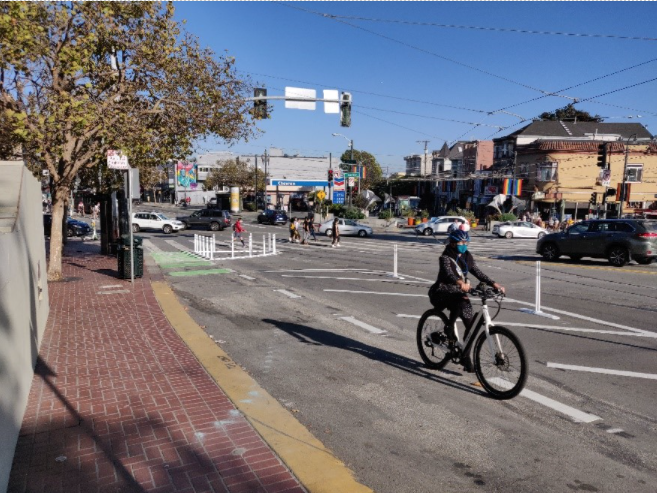 In the first half of 2021, SFMTA crews completed important safety spot improvements to the Castro/Market/17th Street intersection. These include new posts and striping in the roadway to protect the outbound bike lane, increase protection of the westernmost pedestrian crosswalk, and help slow the speed of turning vehicles. These changes are further supported by new traffic calming on 17th Street and a new midblock pedestrian crossing (to Pink Triangle Park) slated for construction with the larger construction project in 2022.

In May 2021, the SFMTA also added a new protected left-turn phase for outbound Market to southbound Castro motorists. This change helps protect pedestrians in the crosswalk between Castro Station/Harvey Milk Plaza and Jane Warner Plaza, where there had been several recent pedestrian collisions. Staff will continue to monitor intersection operations throughout 2021 and consider additional changes to improve safety and overall traffic compliance if necessary.

Based on community feedback and the uncertainty caused by the COVID-19 pandemic and related emergency changes (such as the Noe Slow Street), the final project scope will exclude turn restrictions at the Noe and Sanchez Street intersections. The restriction of southbound left-turns from 16th Street at Market Street and changes to the Hermann/Laguna intersection will move forward since these have broader support and are more directly tied to planned safety investments with the larger capital project.

The Upper Market Street Safety Project is a substantial, multi-phased effort to improve the safety and comfort of Market Street between Octavia Boulevard and Castro Street for all roadway users. The project is based on a data-driven approach to identifying collision hot spots and factors and includes engineering recommendations for the corridor's complex 6-legged intersections, dedicated bike lane upgrades, and public realm improvements to enhance safety and comfort for people walking, driving, and bicycling. Project goals are to improve safety and comfort for all users by reducing the potential for conflict and making travel along the corridor more predictable and intuitive.

The project reflects years of robust outreach and evaluation, as well as prior neighborhood planning efforts - stretching back well over a decade – that include the Upper Market Street 2009 Community Vision and Recommendations and the Market-Octavia Area Plan.

Between 2015 and 2019, nearly $1 million in ‘near-term’ safety improvements were added to the corridor as a down payment on a larger set of traffic and sidewalk changes. The project’s final $10 million construction phase is expected to start in July 2021 and substantially finish by June 2022 and is funded with Market Octavia developer impact fees, SFCTA Prop K sales tax revenues, a state grant, and other local sources.

Landscaping and other public amenities

In 2015, the SFMTA implemented several near-term safety improvements, designed to quickly and effectively increase safety and comfort on the corridor while permanent improvements are designed and legislated.  These near-term project elements included:

From 2018 to 2019, the SFMTA implemented the following near-term improvements that were approved by the SFMTA Board in May 2017:

The project’s final set of capital investments to the Upper Market Street corridor will include the following elements:

In fall 2020, the SFMTA held a public hearing to consider final approvals for the project’s proposed left-turn restrictions at Market Street and new traffic signal at Hermann/Laguna. Once under construction, the project’s main construction phase outreach and notification will be managed by SF Public Works.

Every year, dozens of people are killed and 200 more are seriously injured while travelling on city streets. These deaths and injuries are unacceptable and preventable, and San Francisco is committed to eliminating them.

By adopting a policy called Vision Zero in 2014, the City and County of San Francisco is committed to building better and safer streets, educating the public on traffic safety, enforcing traffic laws, and prioritizing resources to implement effective initiatives that save lives. Vision Zero aims to eliminate all traffic deaths in San Francisco by 2024 and the SFMTA is prioritizing efforts on the corridors that have the highest number of serious and fatal collisions, including Upper Market Street.

The Upper Market Street Safety Project is in support of Vision Zero and will implement targeted, proven safety improvements on the corridor. 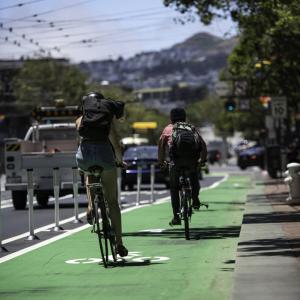 A Big Month for the Upper Market Safety Project 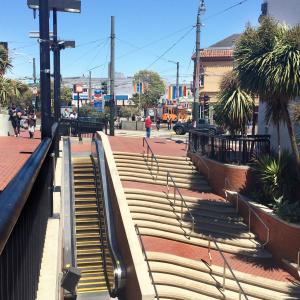